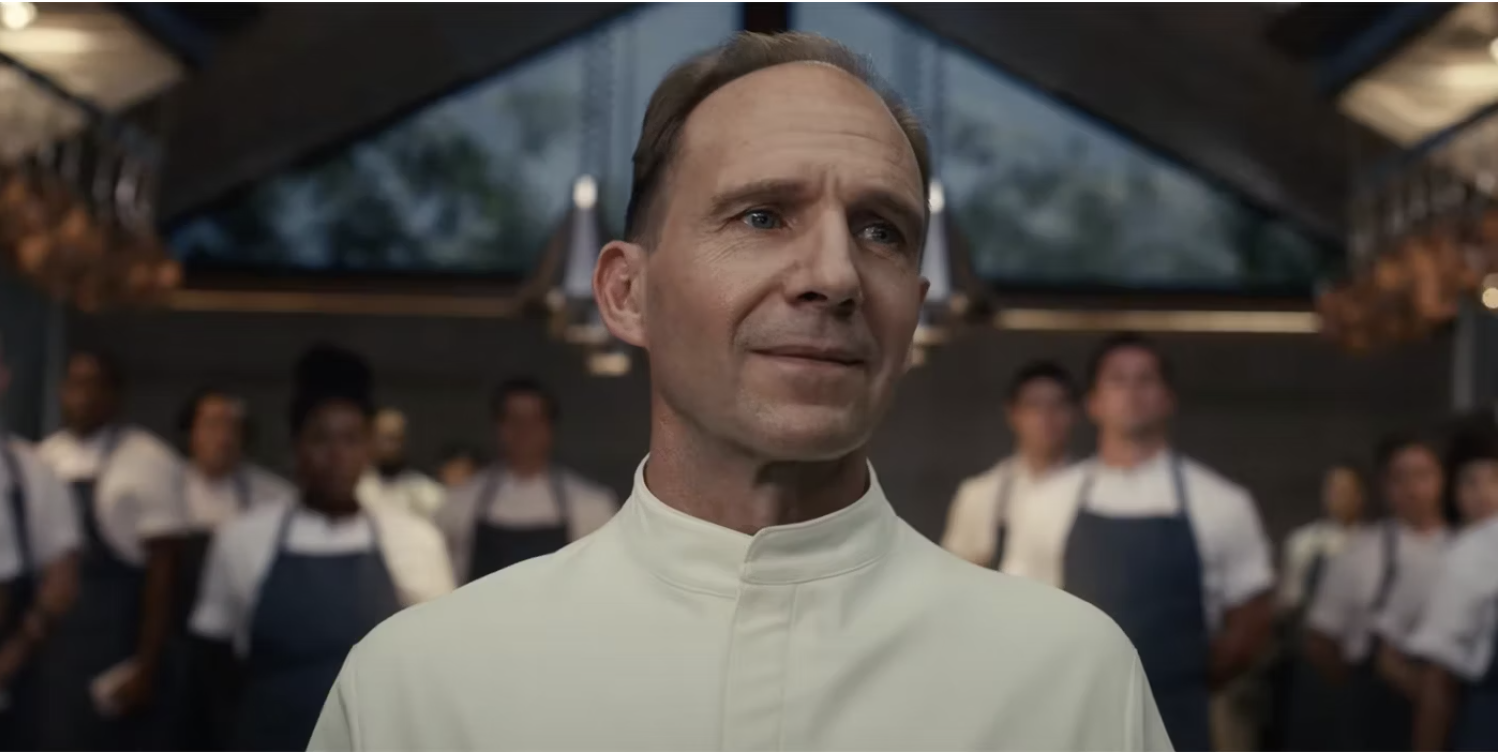 A group of wealthy people arrive on a mysterious island and receive the meal of a lifetime in Mark Mylod’s psychological thriller The Menu. Written by Seth Reiss and Will Tracy, the film stars Ralph Fiennes and Anya Taylor Joy.

A five-star restaurant called Hawthorne is creating a special menu for some high-profile guests. A famed food critic, a “movie” star, some finance bros, affluent couples, and Chef Slowik fans. They received invitations to eat at the five-star eatery and showed up with their egos, arrogance, and money. The outlier, Margo Mills, is Tyler’s (Nicolas Hoult) date. She wasn’t on the invite list, and Chef Slowik was surprised to see her there. The facade doesn’t impress Mills. She knows something is off about the atmosphere as soon as she arrives. Elsa (Hong Chau) is Slowik’s second in command and helps the place run smoothly.

Hawthorne’s kitchen is run like the military. They march food to their guest seats, respond to commands in unison, and only speak when spoken to. No one thinks this is weird except for Margo. The chef regards his guest with disdain. Maybe a hint of things to come? He crafts his dishes based on his life and the lives of his guests. He seems to know secret information about them all and reveals these learned facts through various meals. These people are meant to be at Hawthorne, and all but Margo deserve what’s coming to them.

The Menu provides unnerving satirical commentary on the class divide and how the wealthy are a bottomless pit of need that will never be satisfied. He recognizes that Margo doesn’t come from money and clocks that she is a sex worker, which fascinates him. Interacting with the wealthy is a soulless experience that zaps all the fun and love out of any art. At one point, Margo talks about enjoying her line of work until interacting with hubristic rich men killed any love she had for it. Essentially, Hawthorne is the poor rising up and using food as the harbinger of death. Foodservice and sex workers are highlighted here because society looks down on the profession. It’s a reminder that these professions deserve respect.

The all-star cast of The Menu is in perfect unison. Judith Light, John Leguizamo, Hong Chau, Ralph Fiennes, Ana Taylor Joy, Nicolas Hoult, Janet McTeer, and many others believed in Reiss and Tracy’s smartly written script enough to be a part of it. There is chemistry all around, with the actors playing off each other and supporting one another’s actions as the film moves forward. Important to highlight Chau’s, who has been killing it recently. She commits fully to every role. The Watchmen, The Whale, and now this. Chau is going to walk away with something this award season. I just know it.

The sound design and Collin Stetson’s score are bombastic in a good way. The film wouldn’t be as enjoyable without it. The sound cuts right through your body like a knife. Every shriek, clap, and clank of the glass is clean and precise. Maloyd weaves these elements into his purposefully awkward shooting style with glimpses of Ari Aster’s aesthetic. The director guides the audience down a winding path that will throw them off, so they’ll never see what’s coming.