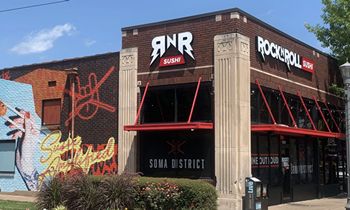 The team opened the brand’s eighth Georgia location in September, and the Duluth restaurant is already earning rave reviews. They now plan to build on that success by opening four more locations in the Peach State, sharing the iconic duo of American sushi and rock & roll with more guests across Georgia.

“Duluth has been eye-opening in terms of how the standard Rock N Roll Sushi model can adapt in a downtown environment,” Burr said. “Now we can’t wait to introduce this one-of-a-kind brand to more communities across the state. Not only are guests digging our amazing food, but the atmosphere is unlike any other sushi restaurant they’ve ever seen. It’s a winning model that we’re eager to expand.”

“We love our fans in Georgia, and we’re excited about Jason’s expansion plans in the state,” Kramolis said. “He has the same passion for music and sushi as we do. Plus, he brings a wealth of knowledge from his previous career stops serving as CFO and COO for a variety of consumer-product businesses. Jason’s been an awesome franchise partner and I know he’s going to do big things in the years ahead.”

Born in Columbus, Georgia, and now living in Atlanta, Burr is a newcomer to the restaurant industry – other than his time as a bartender. But his business credentials are impressive, highlighted by his experience as CFO at 30A, COO at Inked Brands, COO at Pinnacle Promotions and CFO at Tail Activewear. Burr also logged 15 years in venture capital, focused on technology investments. Now, along with his Rock N Roll Sushi exploits, he is CEO and founder of Georgia Quarter Guitars, where he plays and makes custom, hand-built guitars.

“Sushi, rock & roll and alcohol … everyone loves at least one of those – if not all three!” said Burr. “On a more serious note, Rock N Roll Sushi is such a leverageable brand, especially for a music lover like me. I’m excited to see what can be done with it from a social media and live events standpoint. Overall, I believe in Chris and the team’s vision for the future of the brand and appreciate the support they give to their franchisees. I am proud to join them on their journey as they expand in Georgia.”

At Rock n’ Roll Sushi, fans enjoy food that’s deliciously twisted and made fresh to order. Boasting concepts and flavors that are big, bold and loud, Rock n’ Roll Sushi is the only place to experience the rock you love and the rolls you love with the ones you love! Everything about the American-style sushi restaurant, from its soundtrack to its soul, is pure rock ‘n roll – raw, inspired, amplified. To learn more about Rock N Roll Sushi, visit rocknrollsushi.com.

Founded in 2010 by husband-and-wife duo Lance and Gerri Mach Hallmark in Mobile, Alabama, Rock N Roll Sushi is the original American-style sushi restaurant founded on great food, true love and rock n’ roll music. It’s the only theme-restaurant in the world where local and loyal fans can experience the rock they love and the rolls they love with the ones they love. The menu is broken down by Opening Acts, Classics, Green Room, Headliners (with Raw Tracks), Back Stage Hibachi, Kids Rock and After Party, with Rock N Roll Sushi’s greatest hits – like Crispy Wontons, Punk Rock Roll, VIP Roll and Hibachi – stealing the show. From humble beginnings in a modest 1000-square-foot space tucked inside the Mobile Mall, Rock N Roll Sushi has rapidly expanded to encompass more than 50 locations across the Southeastern U.S. in just a decade. For more information about Rock N Roll Sushi, visit rocknrollsushi.com or follow the brand on Facebook or Instagram.