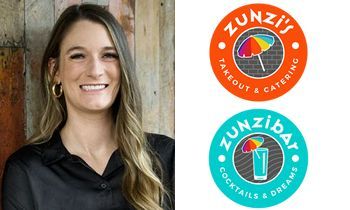 Savannah, GA  (RestaurantNews.com)  Zunzi’s, the 18-year-old fast casual concept known for its award-winning sandwiches, is excited to announce the addition of Joanne Anderson to the Zunzi’s team as director of franchising. In this role, she is charged with overseeing the development and daily operations of franchise locations for Zunzi’s and its sister beach-bar concept Zunzibar as they expand in select markets across the Southeast.

“Joanne brings a unique background in both franchising and marketing that couldn’t be better suited to Zunzi’s as we begin rolling out in new markets,” says Zunzi’s owner Chris Smith. “On top of all that, she’s a perfect fit with our mission statement and our drive to deliver a fast casual experience that makes our fans, team members and franchise partners say ‘SHIT YEAH!’”

“I love what Chris has built and what Zunzi’s is all about,” says Anderson. “I want to grow with a brand that has a purpose and actively helps the communities it serves. And Zunzi’s walks the walk with our charity and enrichment programs like ZUNZIFEST! and 86/26.”

Anderson also is enthusiastic about Zunzi’s mission statement of inspiring people to become the best versions of themselves. “That really resonates with me because I put my all into everything I go into,” she says. “That’s how I’ve always approached franchising as well. I love helping people start a new chapter in their lives and working with them to help build their dreams.”

A graduate of Valdosta State University, Anderson most recently ran Prolifik Marketing, a full-service marketing agency. Before that, she spent more than five years in quick-service restaurant franchising with Zaxby’s Franchising, LLC, and she is excited about using those skill sets to help increase Zunzi’s reach. The company is now focused on opening company locations in Coastal Georgia and Florida and franchising the hybrid concept in the Southeast. The franchise plan calls for 25 hybrid Zunzi’s + Zunzibar locations by the beginning of 2028 with another 75 in development, focusing on a 10-state area encompassing Georgia, Alabama, Florida, Kentucky, Louisiana, Mississippi, North Carolina, South Carolina, Tennessee and Texas.

Beside Zunzi’s award-winning menu and purpose-driven culture, Smith says Anderson was attracted by Zunzi’s + Zunzibar’s average unit volume that outperforms traditional quick-serve and fast casual restaurants with sales over $3 million. “One of our mantras is $3 million is the new $1 million,” says Smith. “Ever since getting into the franchise business, $1 million has always been the target, but we’re changing that narrative with our bar-leading fast casual model. Joanne will be instrumental in driving that growth.”

“Zunzi’s + Zunzibar is such a unique concept, both in terms of its menu and its culture,” Anderson says. “It really stands out from the quick-service crowd in a strong way, so we have a lot of room for growth. And the way we’re going to accomplish this is to get in there and work right alongside our franchisees – show them that we’re willing to put in the work, continually striving to get better and working hard for them. Obviously, if they do well, we do well. But more than that, expanding into different communities and growing our fan base allows us to give back to those communities as much as we possibly can.”

Zunzi’s first opened its doors in 2005 with the sole purpose of filling the tummies of college students at the Savannah College of Art and Design with home-cooked meals. Since then, Zunzi’s award-winning menu has won the hearts of not only SCAD students but also locals and tourists visiting Savannah. By popular demand, Zunzi’s expanded to Atlanta, Georgia, and opened a second location in May 2018. In 2021, Zunzi’s relocated its original Savannah location and added Zunzibar, its sister beach-bar concept. Zunzi’s + Zunzibar is now focused on further expansion by opening company locations in Coastal Georgia and Florida and franchising the hybrid concept in the Southeast. In 2022, Zunzi’s earned a spot on Fast Casual’s Top 100 Movers & Shakers list, and CEO Chris Smith was recognized among Fast Casual’s Top 25 Executives. In 2020, Smith was named among QSR’s “15 Young Restaurant Leaders to Watch.” In 2019, Zunzi’s landed on Thrillist’s compilation of “The 33 Best Sandwiches in America,” and the eatery’s Conquistador was named the best sandwich in Georgia on People magazine’s “Best Sandwich in Every State” list. In 2017, Zunzi’s secured a spot on Mental Floss’ list of “The Best Sandwiches in all 50 States” and BuzzFeed’s “34 Meals That are Actually Worth Traveling the World For.” Zagat also rated the Savannah location’s food a 4.6/5. The Conquistador was ranked among Men’s Journal’s “50 Best Sandwiches in America,” in 2015 and “Best Sandwich in the South” by Travel Channel’s Adam Richman in 2012. For more information, photos and menus, visit zunzis.com.